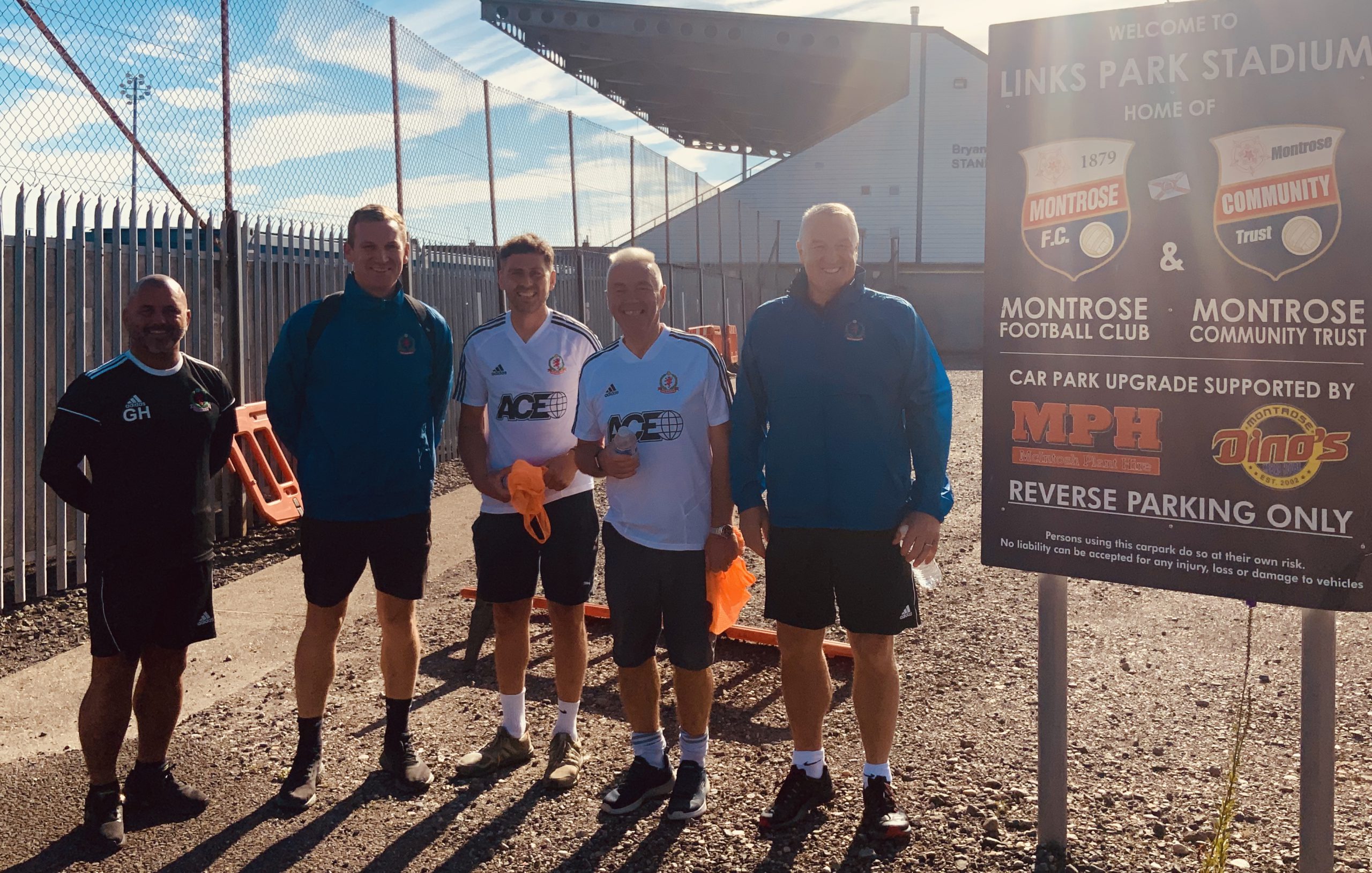 JOHN Sheran became the latest to do his bit to support Cove Rangers’ sponsored walk to Dundee.
Former manager, and now football director, John tagged on at Links Park, home of Montrose, the club he also served with distinction as centre back and boss.
There was even a picture of John celebrating winning the Scottish Second Division title with the Gable Endies way back in 1985 on the wall of the lounge Montrose had kindly opened to allow the walkers to have a wee breather before setting off again.
John was accompanying former Cove  player and coach  Roy McBain and super fan Ian Yule as they continued their trek towards Dundee United’s Tannadice Park.
John came on board as the group said farewell to former club skipper Eric Watson and secretary Duncan Little.
Eric had stepped in at St Cyrus to show his support for his old club.
Duncan had taken over from Cove Rangers coach Gary Hake, who himself had succeeded manager Paul Hartley, the one who walked the first leg of the epic journey taken on by Mark Perry, Roy and Ian.
Former Cove defender Mark walked the first 31 miles from Aberdeen to Johnshaven before saying farewell to to his companions.
Former manager Kevin Tindal and current goalkeeping coach John McCafferty were scheduled to join in before the finishing line.
Roy was managing to battle despite experiencing some pain from a blister on one of his toes.
The sun was rising so the walkers had been advised to slap on the sunscreen with temperatures expected to creep up over the course of the morning.
They are doing the 63 mile walk to help United, Raith Rovers and ourselves, who have been dragged into a legal fight, through litigation and now arbitration, to ensure the promotion we earned in season 2020-21 stays in place.
Fans and former players of United, who won promotion to the Premier League, and Raith Rovers, who earned promotion to the Championship, are also doing sponsored walks in an amazing show of solidarity against what all three clubs see as an unfair penalty for being declared as worthy champions of our respective divisions last season.
The sponsorship money raised will go towards the legal costs of fighting our case.
Ourselves, United and Raith have already incurred over £50,000 in legal costs and these costs could escalate to over £150,000 by the time arbitration concludes.
A portion will also be donated to Ian’s chosen charity, Aberdeen Voluntary Services.
The walkers are aiming to arrive at Tannadice around 8pm on Saturday evening.
At the time of writing, the sum raised had reached an astonishing £8,665.
A north-east businessman, who wishes to remain anonymous, has also pledged to match the final sponsorship total.
We would also like to thank everyone who has agreed to sponsor Mark , Roy and Ian for their generosity. 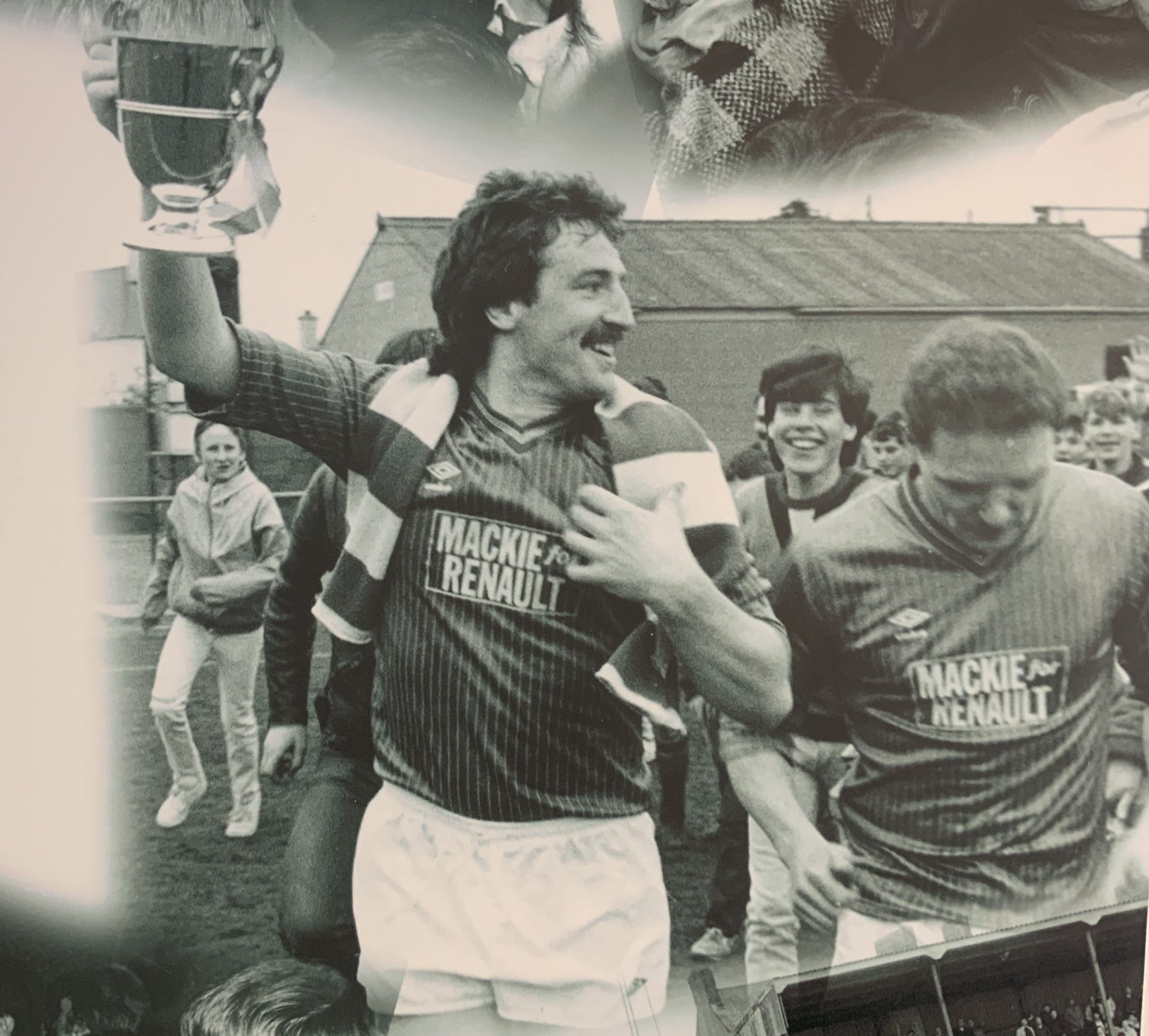 PAST HERO: The picture of John Sheran that is on the wall at Links Park.

TEAM STREAK THROUGH STONEY AS THEY CONTINUE TREK TOWARDS DUNDEE »
We use cookies on this site to improve your user experience. By continuing to use this site we will accept this as agreement of our policy.OkPrivacy policy