RUGGED ROY DETERMINED TO SEE THINGS THROUGH DESPITE PROBLEMS WITH BLISTERS 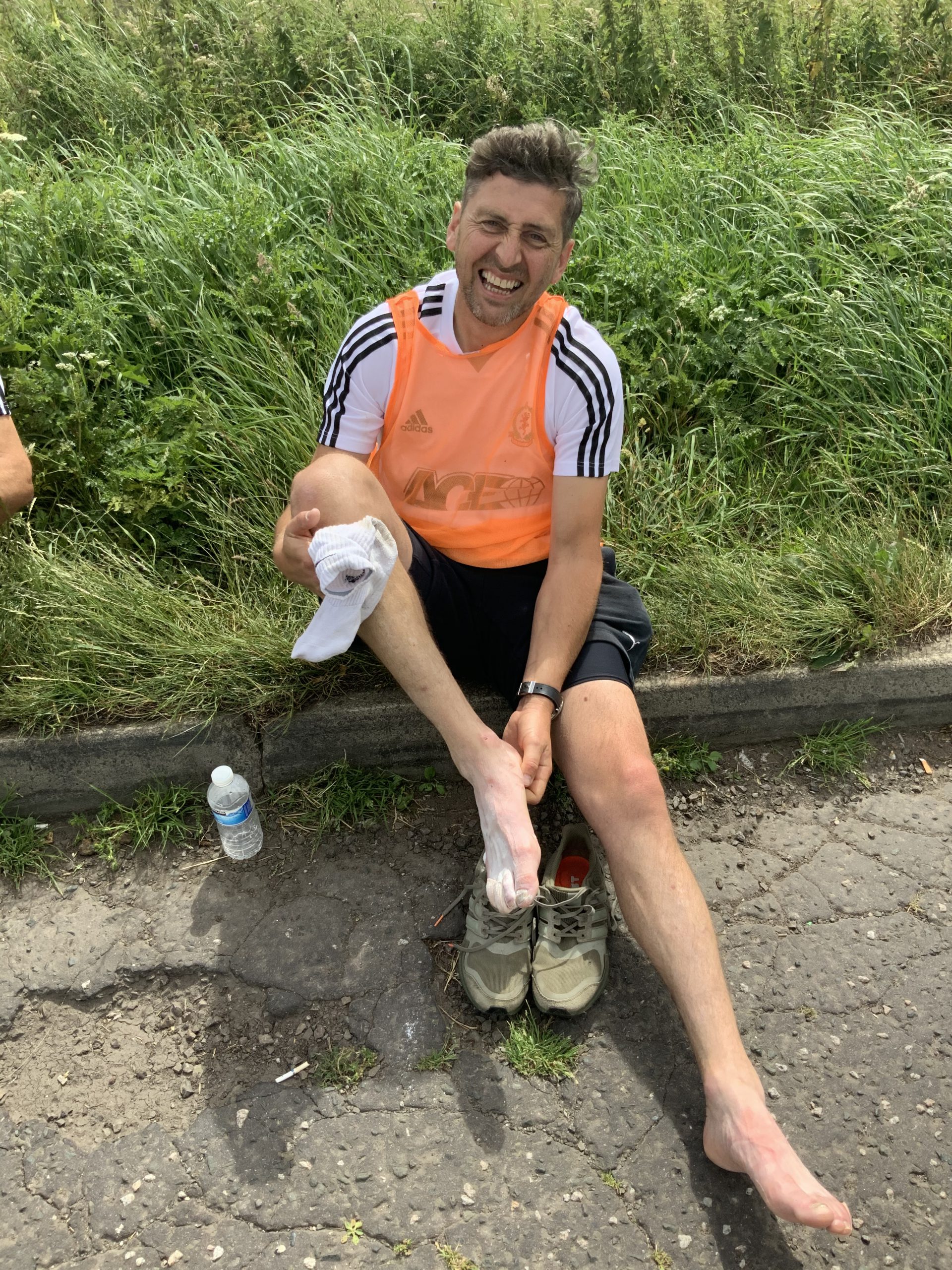 ROY McBain was having to fight through the pain barrier to stay on course to complete Cove Rangers’ charity walk to Dundee.
Former Cove player and coach Roy needed treatment to blisters on some of the toes on his right foot but made it clear he was determined to do the full 63 miles between Balmoral Stadium to Dundee United’s Tannadice Park.
“It’s a bit uncomfortable but I won’t let something like that stop me after coming so far already,” said Roy, who, like Cove super fan Ian Yule had completed an amazing 48 miles already since leaving Balmoral at 10pm last night.
‘“I’ve really enjoyed the walk so far. The others walking have been really good company so hopefully I will be able to see things through to the end.”
Roy and Ian were homing in on Arbroath, accompanied by former Cove Rangers defender and manager Kevin Tindal.
The latter had picked up the baton from Cove football director John Sheran, who was off for a well earned rest after his stint through from Montrose.
Cove coach Gary Hake was set to take over from Kevin, for his second stint in the charity walk, at Arbroath.
Cove Rangers manager Paul Hartley, former captain Eric Watson and secretary Duncan Little had also walked parts of the route.
Former Cove Rangers defender Mark Perry walked the first 31 miles, from Balmoral Stadium to Johnshaven, as they all dug deep for the Cove cause.
They are doing the walk to help United, Raith Rovers and ourselves, who have been dragged into a legal fight, through litigation and now arbitration, to ensure the promotion we earned in season 2020-21 stays in place.
Fans and former players of United, who won promotion to the Premier League, and Raith Rovers, who earned promotion to the Championship, are also doing sponsored walks in an amazing show of solidarity against what all three clubs see as an unfair penalty for being declared as worthy champions of our respective divisions last season.
The sponsorship money raised will go towards the legal costs of fighting our case.
Ourselves, United and Raith have already incurred over £50,000 in legal costs and these costs could escalate to over £150,000 by the time arbitration concludes.
A portion will also be donated to Ian’s chosen charity, Aberdeen Voluntary Services.
The walkers are aiming to arrive at Tannadice around 8pm on Saturday evening.
At the time of writing, the sum raised had reached an amazing £9,000.
A north-east businessman, who wishes to remain anonymous, has also pledged to match the final sponsorship total.
We would also like to thank everyone who has agreed to sponsor Mark , Roy and Ian for their generosity.

DIRECTOR JOHN JOINS SPONSORED MARCH ONWARDS TOWARDS TANNADICE »
We use cookies on this site to improve your user experience. By continuing to use this site we will accept this as agreement of our policy.OkPrivacy policy