YULE NOT FIND ANYONE AT COVE RANGERS LOOKING ANY FURTHER AHEAD THAN OUR NEXT MATCH, SAYS BLAIR 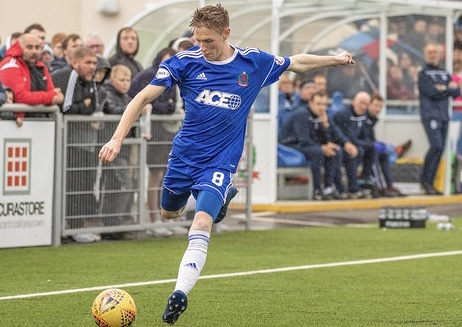 BLAIR Yule says nobody in the Cove Rangers camp is paying any attention to the fact we now find ourselves five points clear at the top of the Ladbrokes League Two.
“All that interests us is the next game and seeing if we can do enough to win that,” said defender Blair as he continued his build up to tomorrow’s league clash with Annan Athletic at Balmoral Stadium.
“I know the old ‘one game at a time’ response isn’t what some people want to hear, but it has always been the way we have looked at things at Cove Rangers.
“It’s nice to be where we are right now, but if we failed to stay focussed on the task in hand things could change very quickly.
“We also have to remember we are up against opponents who beat us quite heavily the last time we met (Annan won 6-1 at Galabank in November).
“We have a point to prove to them and ourselves, that point being that we are a far better side than we showed that day.
“A lot was made of us being hampered by injuries, but that was still no excuse for what happened.
“Annan were very good on the day and deserved their victory but we should still have competed a lot better than we did.
“We let them take advantage of us by playing so poorly and it’s important we don’t let that happen again because we know they are more than capable of punishing us if we do.”
Cove have won all 10 of the League Two games played at Balmoral Stadium so far and Blair admitted that’s a run the players are tremendously proud of.
“Any newly promoted side would be pleased with a run like that,” he said.
“A lot of it is down to the size of the pitch, it really suits the way the manager wants us to play.
“We are encouraged to keep the game as wide as possible and keep possession and it has helped us eventually grind teams down.
“It has worked well so far but each new game presents a fresh challenge.
“You can be sure Annan have looked at the way we’ve played at home so far and will have a game plan set up to make it difficult and hopefully get the win themselves.
“We accept we will need to be at our very best again if we are to have any hope of overcoming them to claim the three points.”
Blair is seen as a midfielder but has played at right-back for the majority of the campaign.
The 25-year-old former Arbroath player says he has enjoyed the switch of position, although he accepts he will have to keep playing well if he wants to stay in the side, even more so with Daniel Higgins fit again and Tom Leighton recently moving to Balmoral Stadium.
“It took a bit of getting used to at the beginning of the season,” said Blair.
“I had played at right-back before but the manager demands you do more than just defend when you play there now.
“I’m really enjoying it because both full-backs are encouraged to get forward, you can almost be part of a front five at times.
“Hopefully I can keep doing well enough to stay in the side because none of us ever take that for granted because we know there are other good players desperate for their opportunity.”

COVE RANGERS BOSS PRAISES PLAYERS FOR ENSURING BALMORAL HAS BEEN A HAPPY HOME FOR US SO FAR »
We use cookies on this site to improve your user experience. By continuing to use this site we will accept this as agreement of our policy.OkPrivacy policy